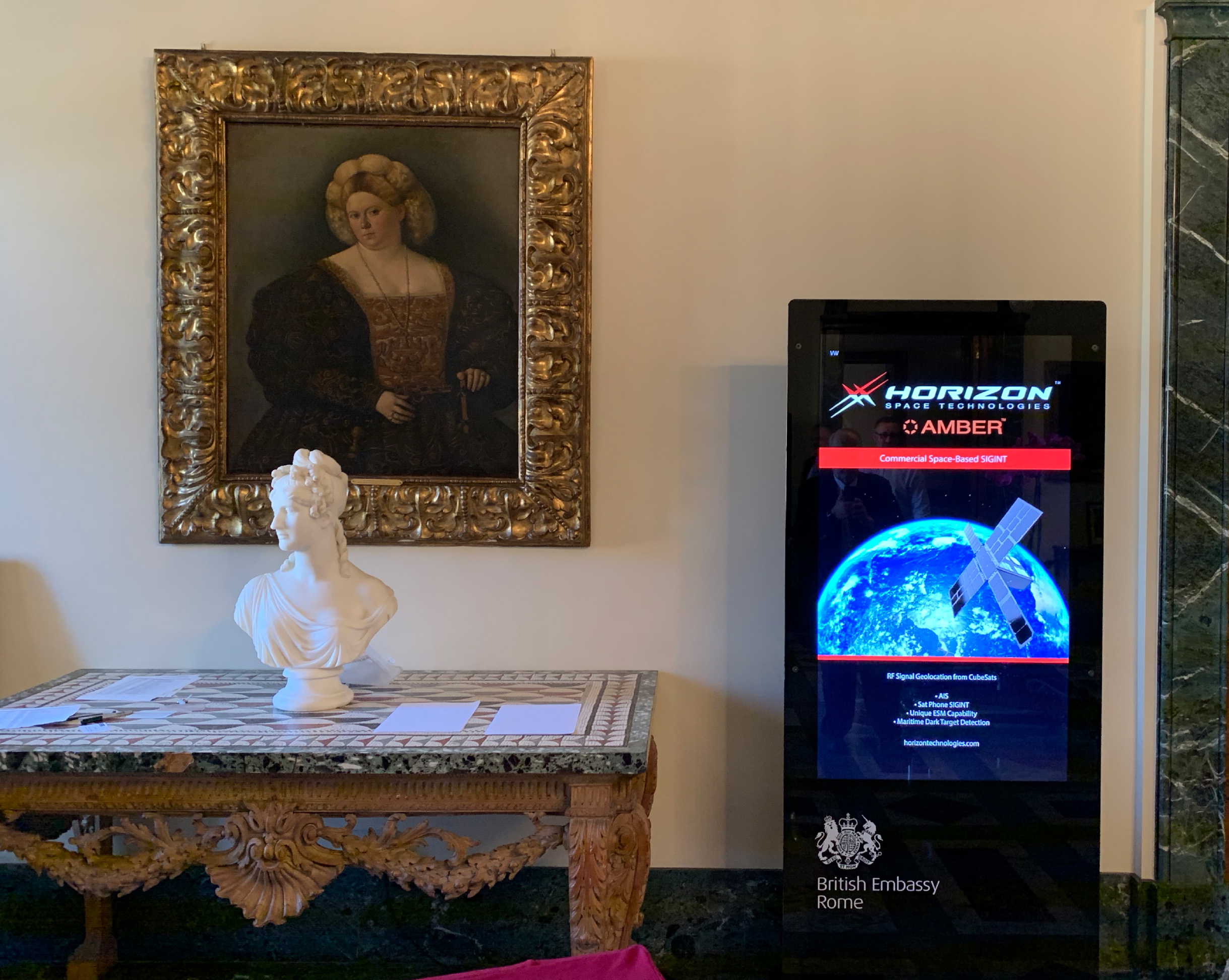 Posted at 12:05h in Uncategorized by Ann Bevans
Share

London, UK — In anticipation of the launch of IOD-3 Amber in 2020, Horizon Technologies, and the UK Satellite Applications Catapult held an Amber Users’ Workshop in Rome, Italy on 9 October, 2019 at Her Majesty’s Ambassador’s Residence; the historic Villa Wolkonsky. The workshop addressed Italian maritime intelligence requirements and was organized by Horizon Technologies, the Satellite Applications Catapult, the UK Department for International Trade (DIT), and the Defence & Security Organization (DSO). It was chaired by the UK Defence Attaché Col. Simon Lawrence and was attended by delegates from thirteen (13) different Italian government services/agencies. The purpose of the workshop was to introduce Amber capabilities to the relevant Italian Government agencies, and to facilitate the transfer of Amber data to these Italian agencies as soon as the IOD-3 Amber, the first Amber CubeSat, is operational next year. There was a classified session to discuss the most sensitive of the datasets which will be provided.

Horizon Technologies CEO John Beckner stated, “The quality of the attendees, and the level of technical discussion was outstanding. In addition, we couldn’t have been more pleased with the organization and wonderful venue for this workshop. The support provided by the UK Government DIT/DSO team in Italy as well as the Satellite Applications Catapult was unmatched, and essential to the success of the workshop.”  Beckner added, “There will be an ongoing technical dialog with the Italian Government over the next twelve months until Amber achieves operational status. Amber will play a key role assisting Italy with its current EU/NATO missions around the world, and in the Mediterranean Sea; especially the migrant/refugee problem.”

Dr Chris Brunskill, Head of Access to Space at the Satellite Applications Catapult, said “We’re very excited to be working with Horizon Technologies to explore and develop the SIGINT market using satellite-based data. The IOD Programme has allowed us to provide a dedicated spacecraft platform and mission solution to quickly and responsively support the Horizon team in capturing this commercial opportunity.”

Together with the UK Government, Horizon Technologies and the Satellite Applications Catapult will be responding to customer requests and will be holding a series of monthly country and regional Amber users’ workshops up until the first Amber-1 launch in 2020, and beyond.  As Gary Goodrum, Horizon Technologies CTO said, “Every country has their own interface requirements to their maritime domain awareness platforms, and it’s important to have these discussions as soon as possible before the data comes online.”  The Horizon Technologies team was also supported by UK SME, LN Systems in Lincoln who is a subcontractor to Horizon Technologies for the Amber Processing Center(s).

Horizon Technologies is the world leader in airborne satellite phone monitoring systems for ISR applications, equipping governments worldwide by enhancing their SIGINT capabilities. They are the OEM for the FlyingFish™ system which is flying on numerous ISR aircraft worldwide. FlyingFish™ systems fly daily on missions for NATO and FRONTEX. Horizon Technologies has offices in the United Kingdom, and the USA. In 2020, Horizon Space Technologies will be launching the first of their Amber commercial SIGINT CubeSats and providing customers with a new Maritime Intelligence Data Service. Visit HorizonTechnologies.com